Probably the first glass filter ever to be invented may well be the last one standing.

In an era when many traditional effects such as colourisation and diffusion can be added quickly and cheaply in the edit room – where they can also be tweaked and adjusted to perfection – the humble polarizer still performs a function that can’t be replaced by a computer. This is because the polarizer, like a discerning nightclub’s bouncer, is using blunt physics to decide what is and isn’t getting in.

Let’s look at a bit of science to explain how polarizers work.

When waves of light spread out from a light source such as the sun or a lamp, the light goes out in all directions, radiating out from the source. But when some of that light hits a shiny surface that is reflective, such as a window, it bounces off and that bouncing light is largely travelling in a single direction, causing a reflection. Now that the bouncing light is lined up and travelling in this fashion, it is polarized.

So what our humble but oh so clever little polarizer does is eliminate the polarized light which is travelling in one direction, to weed it out from the general light – and hey presto, your annoying reflections are gone. 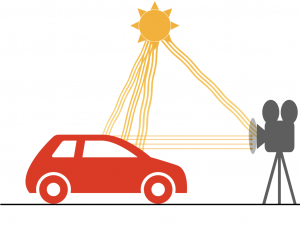 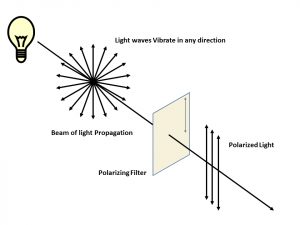 So by blocking light from a singular direction, you can rotate your polarizer until you cancel out the light from your reflection, almost as if by magic.

But that isn’t the only trick up a polarizer’s sleeve. The other very common use is to enhance the look of skies. Polarizers will make the blue of the sky seem darker and more vivid. In simplest terms, while the light from the sun hits the atmosphere unpolarized, some of it reflects off the gas particles within the atmosphere and becomes polarized and those waves of light travelling at the right angle will be filtered out by the polarizing filter, hence a little less light hits the lens.

Although filters are physically square, rectangular or round, circular and linear don’t refer to the shapes of the filters themselves but rather to the properties of the glass.

The linear polarizer is simply an ordinary polarizer as we’ve discussed. It blocks light from one specific direction while allowing light from all other directions to pass through. However, having passed through the filter, the unpolarized light, having been channeled through the glass, now itself becomes polarized.  And for some digital cameras this can present a problem.

This is because some digital cameras will process light in such a way as to polarize it themselves. The problem therefore is that with a linear polarizer on such a camera, this set up is effectively trying to polarize the light twice. This results in it looking strange or even not being seen at all, since at certain angles the light will be completely blocked.

Enter the circular polarizer to the rescue.

The circular polarizer features another layer of filtration – a quarter-wave plate which depolarizes the light before it exits the glass.

The reason this double filter is called a circular polarizer is because the method by which the light is agitated back to its prepolarized state is by spinning it. So as it passes through the filter, it is lined up into a neat singular direction and then oscillated into a rotational pattern to leave all jumbled up again!

Linear and circular Polar filters can, at first glance look the same so here’s a handy tip to tell if a polarizer is linear or circular even if it is not marked.
Hold the polarizer roughly 3 inches in front of your eye, and look at your reflection in a mirror. Looking from the camera’s viewpoint you should see the image of your eye in the mirror (as if looking through a neutral density filter). Now turn the filter round to other surface. If the polarizer is linear you should see the same thing that you saw before, but if it is circular it will appear black and you will not see the reflected image of your eye.

To see our range of polarizers and for more information on individual uses, take a look here.

You can find out more about which cookies we are using or switch them off in settings.

This website uses cookies so that we can provide you with the best user experience possible. Cookie information is stored in your browser and performs functions such as recognising you when you return to our website.

Strictly Necessary Cookie should be enabled at all times so that we can save your preferences for cookie settings.

If you disable this cookie, we will not be able to save your preferences. This means that every time you visit this website you will need to enable or disable cookies again.